The Zambezi River is the fourth-longest in Africa with only the Nile, Congo, and Niger being longer.

Visit One Of Africa’s Wild Rivers

The phenomenon of the Zambezi River is its diversity and the aura it holds of a majestic Africa that is waiting to be visited and experienced.

The Zambezi is one of Africa’s last remaining wild rivers and is one of the finest and least spoiled in the world. It boasts many important ecosystems and habitats:

The 2,574 kilometers long river has its source in Zambia and flows through Angola, along the border of Namibia, Botswana, Zambia, and Zimbabwe, to Mozambique, where it empties into the Indian Ocean.

It also has the distinction of being the largest river flowing into the Indian Ocean.

The Zambezi supports large populations of African wildlife with the riverine woodland having many large animals, such as buffalo, zebras, giraffes, and elephants.

Hippopotamuses are plentiful along most of the calm stretches of the waterway, with many crocodiles populating the river banks.

This incredible waterway also supports several hundred species of fish, some of which are endemic.

Important species include cichlids which are fished widely for food, as well as catfish, tigerfish, yellowfish, and a host of other large species.

The bull shark, sometimes locally known as the Zambezi shark, normally inhabits coastal waters but has been found far inland in many large rivers, including the Zambezi.

Birdlife is abundant with over six hundred bird species taking advantage of the rich waters.

The River and Victoria Falls

Where is the Victoria Falls situated on this vast river?

This spectacular waterfall is located about midway along the course of the waterway, at the border between Zambia and Zimbabwe.

This spectacular attraction is one of the Seven Wonders of the World with its four gorges creating rapids that match any in the world for their class.

Other waterfalls on this huge watercourse include the Chavuma Falls at the border between Zambia and Angola and Ngonye Falls in Western Zambia.

This waterway is also one of the most heavily dammed rivers in Africa, with at least 30 large dam walls holding back its natural flow.

Four of the world’s largest hydroelectric dams – Kariba, Itezhi-Tezhi, Kafue, and Cahora Bassa and their huge lakes have stemmed much of the waterway’s annual floods.

Besides the natural ecosystems and rich population of wildlife, the river also supports millions of people, who make use of its rich fisheries, forests, water, and rich floodplain soils.

The lower Zambezi in Mozambique is the most productive and biologically diverse tropical floodplains in Africa.

The present-day Zambezi can be divided up into three sections, the Upper Zambezi, the Middle Zambezi, and the Lower Zambezi.

The 3 Sections Of The Zambezi River 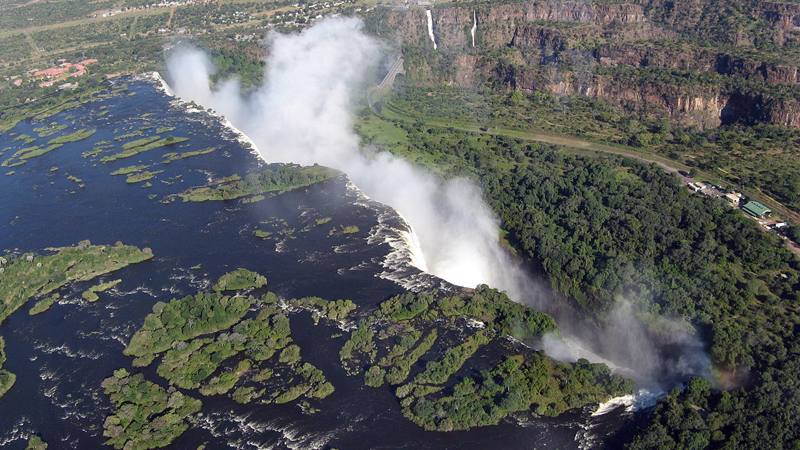 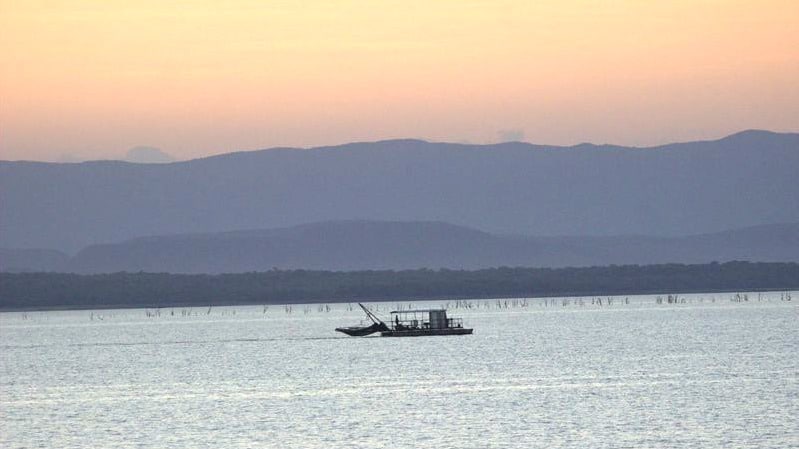 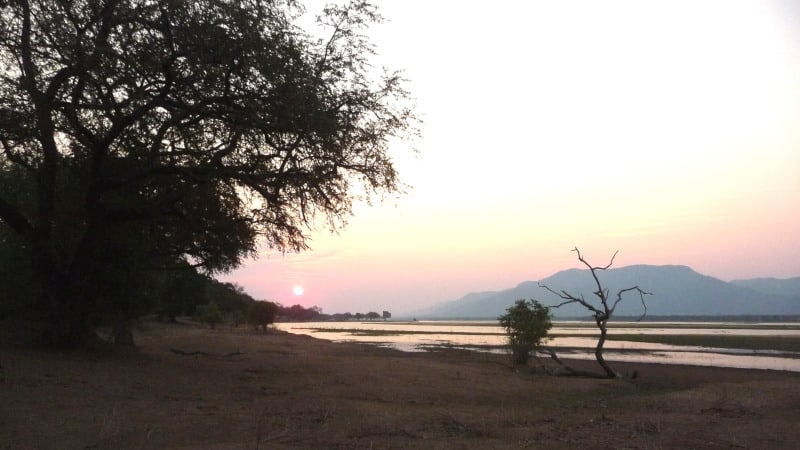 The source of the Zambezi starts in a marshy bog in Zambia and eventually enters Angola. In this first section of its course, it is joined by more than a dozen tributaries of varying sizes.

The river then enters a stretch of rapids after which it meanders through the broad grasslands of the Sesheke Plain flowing past Botswana territory and finally forming the frontier between Zambia and Zimbabwe.

On its way to the Victoria Falls, the river varies considerably in width, from open wide stretches to rapids through narrow channels.

The Victoria Falls marks the end of the upper course of the Zambezi when its waters fall over the edge of the gorge.

The Zambezi’s middle course extends about 600 miles from Victoria Falls to Lake Cahora Bassa in Mozambique. It continues to form the boundary between Zambia and Zimbabwe until it crosses the Mozambique border at Luangwa.

The middle Zambezi is noted for the two man-made lakes, Kariba and Cahora Bassa which make up most of this stretch of the river.

At the dam wall at the eastern end of Lake Cahora Bassa, the Zambezi begins its lower course, during which it descends from the Central African Plateau to the coastal plain.

The hilly country is replaced by flat areas before cutting the Lupata Gorge through a range of hills. The river then flows onto the Mozambique Plain which occupies a broad valley.

The water spreads out into a wide, flat, and marshy delta before the Zambezi River ends its journey entering the Indian Ocean.

In which country is the river Zambezi found?

As the Zambezi River is the fourth-longest river in Africa, it flows through six countries. On its 2 700 km journey from Zambia to the Indian Ocean the river passes through Angola, Namibia, Botswana, Zimbabwe, Zambia, and Mozambique.

What is the Zambezi river famous for?

There are 3 landmarks that are found on the Zambezi River. The most famous is Victoria Falls, the greatest waterfall in Africa. The others are Lake Kariba and Cahora Bassa Dam which are very large dams home to 2 of Africa’s largest hydroelectric projects.

Are there crocodiles in the Zambezi River?

The Nile crocodile is found all along the Zambezi river from its source right down to where it enters the Indian Ocean. There are only a few places that the crocodiles avoid – these are where the water is too rough, such as the rapids and gorges directly below the Victoria Falls.

Is it safe to swim in the Zambezi River?

We would strongly advise against taking a dip anywhere in the Zambezi River. It is the home to Hippopotamus and Crocodile which are both notorious for being dangerous and unpredictable. It is only advisable to swim in swimming pools provided at your accommodations.

Where is the source of the Zambezi River?

The Zambezi River source is in a marshy wetland in the middle of the famous Miombo Woodlands of northwest Zambia, in the Mwinilunga District.